To share your memory on the wall of Maxine Van Norman, sign in using one of the following options:

Mrs. Van Norman tirelessly worked with her husband in the ministry for 44 years, serving Church of God (Anderson) congregations in Ames, Iowa; LaJunta, Colorado; Eaton, Indiana; Ansonia, Ohio; Burlington, Michigan; Sanford, Michigan; and following retirement, served in an interim capacity at First Church of God in Clinton. After her husband passed away in 2010, Mrs. Van Norman moved to Chesapeake, Virginia, to be near family.

Mrs. Van Norman was an excellent cook, loved baking cookies, and hosting family and friends in her home. She was actively involved in many ministry opportunities, including leading youth groups, choirs, missionary societies and providing exceptional administrative support.

She was preceded in death by her parents, husband, five sisters and daughter-in-law (Colleen).

To send flowers to the family or plant a tree in memory of Maxine Ruth Van Norman (Hill), please visit our Heartfelt Sympathies Store.

Receive notifications about information and event scheduling for Maxine

We encourage you to share your most beloved memories of Maxine here, so that the family and other loved ones can always see it. You can upload cherished photographs, or share your favorite stories, and can even comment on those shared by others.

Posted Jul 16, 2020 at 06:51pm
Please accept our most heartfelt sympathies for your loss... "Aunt Maxine" will remain in our hearts forever. 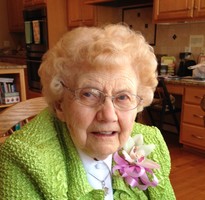