To share your memory on the wall of Jerry Mensinger, sign in using one of the following options:

Jerry was born April 12, 1943 in Clinton, Iowa the son of Russell and Grace (Nielson) Mensinger. Jerry was united in marriage to Alice Tillema on April 12, 1977 in Mexico.

Jerry served our County in the U.S. Army a veteran of the Viet Nam war. His time in the military included active duty during the Tet Offensive. He was a life-time member of the VFW.

Jerry enjoyed the outdoors, especially hunting and fishing. He loved his family very much and will be greatly missed.

Preceding Jerry in death were his parents.

Receive notifications about information and event scheduling for Jerry

There are no events scheduled. You can still show your support by sending flowers directly to the family, or planting a memorial tree in memory of Jerry Russell Mensinger.
Plant a Tree

We encourage you to share your most beloved memories of Jerry here, so that the family and other loved ones can always see it. You can upload cherished photographs, or share your favorite stories, and can even comment on those shared by others.

Plant a Tree in Memory of Jerry
Plant a tree 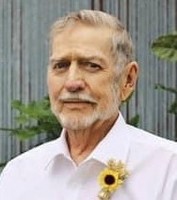