To share your memory on the wall of Catherine & Richard James, sign in using one of the following options:

Over the years they loved, supported, cared for each other, however they also had their own interest. Catherine enjoyed putting together crafts, knitting and crocheting. She loved to design and put nice quilts together for family and friends. She also enjoyed cooking and baking, especially for the Holidays. Dick loved being outdoors, especially hunting and fishing. He also enjoyed woodworking.

Dick would ultimately retire from Alcoa and Catherine concluded her career working for the Clinton School System – she was affectionately known as the “Lunch Room Lady” and even in retirement received nice cards from former students who remembered her kindness and love. Both loved their family very much, especially the grandchildren and will be incredibly missed.

Both were members of Prince of Peace Catholic Parish.

They were preceded in death by their parents; Catherine’s - two sisters – Betty Andresen and Mary Ellen Hall and one brother – Gerald “Shooter” Faur and Dicks two brothers – Bill Sr. and Jack James.

Memorials made can be directed to the Breast Cancer Research Foundation or the Alzheimer’s Association.

Fond memories and condolences for the James’ family may be shared at www.lemkefuneralhomes.com, obituary page.
Read Less

Receive notifications about information and event scheduling for Catherine & Richard

There are no events scheduled. You can still show your support by sending flowers directly to the family, or planting a memorial tree in memory of Catherine & Richard James.
Plant a Tree

We encourage you to share your most beloved memories of Catherine & Richard here, so that the family and other loved ones can always see it. You can upload cherished photographs, or share your favorite stories, and can even comment on those shared by others.

Your friends at Yates Electric

Posted Jan 05, 2021 at 06:50am
Brian, our thoughts are with you and your family during this very difficult time.

5 trees were planted in the memory of Catherine & Richard James

Posted Jan 17, 2021 at 09:58pm
My deepest sympathy to Cathy and Dick’s family. I worked with Cathy for many years. Bluff Medical Center and Land Barowsky Eye Center. Your folks were so kind. Your Mom would always help me out on how to save money since I was a young bride and new mom through the years. A very hard worker and very efficient! I know they are happy together b/c they were here on Earth!
Jill & John Mootz
Comment Share
Share via:
TH

Dave and I just heard about your parents’ passing. I worked with your mom and she and Dick were special people. Your Dad made our son Zach a cradle when he was first born. He had such great woodworking talent. Your mom’s laugh and smile were contagious. I have such fond memories of your parents. Wishing you and your families comfort and peace knowing that they are together. Tina and Dave Holst
Comment Share
Share via:
EB

Posted Jan 06, 2021 at 02:27pm
My deepest sympathies and prayers for all of your family. I worked at Bluff and River Cities with your Mom when you boys were young...well, I guess WE were young, then too!!! I cannot tell you how much fun we had...your Mom’s laugh will live in my heart forever!!!! Mischief just found us, somehow!!!! And your Dad...what a guy!!! I loved them and will forever cherish their friendship. Love and prayers for peace and strength in the days ahead.
Comment Share
Share via: 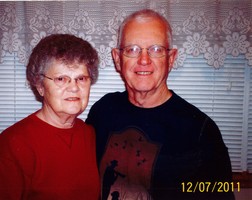 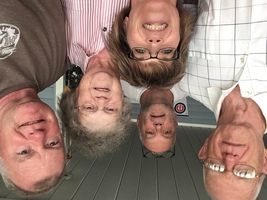 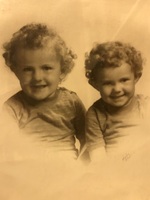