To share your memory on the wall of Robert Keen, sign in using one of the following options:

Robert was born March 19, 1964 in Fort Meade, Maryland, the son of Charles and Patricia (White) Keen. He was united in marriage to Debra Jensen on September 16, 1994 in Clinton, Iowa.

Robert started his career at International Paper; following the Plant closure, he went back to school and acquired a HVAC technical degree. He worked as a Union Sheet Metal Fabricator for Climate River Valley.

He enjoyed boating and loved being on the river. Years ago, he enjoyed attending the River Boat Days activities, especially tractor pulls and demolish derby’s. He was happy to make it known to all that he was an avid Green Bay Packer fan. He also enjoyed socializing and tipping back a few Heineken’s.

Robert was an avid radio scanner enthusiast. In 2015, Robert had a vision of utilizing a social media platform, Facebook, to help keep the community informed and aware of events broadcasted on the scanner – he created the “Scanner -info Clinton/Camanche/Fulton” page. Because of his fondness for animals, he quickly added one more approved item for folks to communicate on his page, this was near and dear to his heart - allowing folks to post lost pets in an effort to re-unite them with their owners. His little Facebook page started out with less than 50 members and quickly grew to the current number of 19,0000+ members. He spent enormous amounts of time managing his page trying to keep it fair, balanced and in-line with his vision – this was a labor of love for Robert Keen. Later on, in life he simply enjoyed posting beautiful pictures each morning of his beloved river.

Robert touched thousands of life’s in such a positive manner, some of those folks he never met. He will be forever missed by his family, friends and the community as a whole.

He was preceded in death by his mother in-law.

Receive notifications about information and event scheduling for Robert

There are no events scheduled. You can still show your support by sending flowers directly to the family, or planting a memorial tree in memory of Robert William "Rob" Keen.
Plant a Tree

We encourage you to share your most beloved memories of Robert here, so that the family and other loved ones can always see it. You can upload cherished photographs, or share your favorite stories, and can even comment on those shared by others.

Posted Aug 19, 2020 at 07:17pm
Sorry for your loss. Don't know him personally but seen his name on comments. His comments always made sense to me.
Comment Share
Share via:
AO

My sincerest condolences to the entire Keen family. May you all find peace and comfort in your memories and each other. Your cousin, Nanette 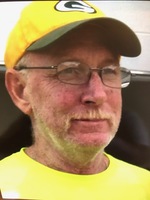