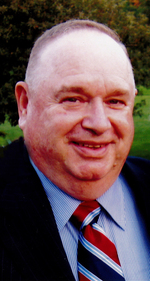 Bill was born December 5, 1940 in Clinton, Iowa the son of Francis and Ethel (Hurlburt) Warren. He was a 1958 graduate of St. Mary’s High School. Following high school, he enlisted in the U.S. Navy, retiring after a 21-year career that included submarine service during the Cuban Missile Crisis. Following his Naval career, he received an Associate’s Degree in Business from AIC.

Bill was united in marriage to Phyllis Lemke on September 16, 1961 in Clinton, Iowa.

He was a member of St. Mary’s Catholic Parish. He was also a member of the Eagles Club, the VFW and AMVETS post 28. Bill also volunteered at the American Red Cross, Mercy Hospital and the Genesis VNA.
Bill owned and operated Warren’s Tavern and Confectionary Inc. from 1969 to 1981. Additionally, he worked at Lyondell, as an Electrician, retiring after 20+ years.

Bill enjoyed the outdoors, especially boating, fishing and hunting. He loved all sports and enjoyed participating in slow-pitch softball leagues. He also enjoyed reading and loved all of his pets that he had throughout his life. Above all, he loved his family very much and will be sadly missed.

Preceding Bill in death were his parents.

In lieu of flowers, donations can be made to the Clinton Humane Society in Bill’s name.