To share your memory on the wall of Troy Skinner, sign in using one of the following options:

Troy was born September 15, 1955 in Benton, Kentucky the son of Dewey and Jincy (Heflin) Skinner. He was a 1973 graduate of Livingston County High School. Immediately following high school, he enlisted in the United States Marines Corps, serving 4 years, a veteran of the Vietnam War.

Troy was united in marriage to Diane Reistroffer on November 30, 1974 in Triangle, Virginia.

In 1983, Troy started working, part-time, for the Aurora Casket Company, in DeWitt, following his previous employment at the Caterpillar Plant in Mount Joy, which subsequently closed. In March 1985, he became the Aurora, DeWitt Facility, Warehouse Manager – a position he still held with Matthews/Aurora upon his death.

Troy was a dedicated member of the Elmer H. Brown Legion Post in Spragueville, Iowa.

Troy loved the outdoors, especially camping and fishing. He also enjoyed playing cards. Above all, he loved his entire family very much and will be sadly missed.

Preceding Troy in death were his parents.

Troy was honored to be an Iowa Organ Donor.

Fond memories and condolences for Troy’s family may be shared at www.lemkefuneralhomes.com, obituary page.
Read Less

To send flowers to the family or plant a tree in memory of Troy Linn Skinner, please visit our Heartfelt Sympathies Store.

We encourage you to share your most beloved memories of Troy here, so that the family and other loved ones can always see it. You can upload cherished photographs, or share your favorite stories, and can even comment on those shared by others.

Ramon A, Ryan S, John D, Brent B, Jon M and Matthews Aurora FS have sent flowers to the family of Troy Linn Skinner.
Show you care by sending flowers

Posted May 11, 2019 at 05:04pm
We will miss him at the theater. Since I work tonight, I will have popcorn, raspberry tea and some jr. mints in his memory. Much love to the family.
Comment Share
Share via:

Posted May 10, 2019 at 02:08pm
Our thoughts and prayers are with you. With deepest sympathy, the Matthews Aurora Sales Team.

Posted May 10, 2019 at 12:41pm
Diane, You have our deepest sympathy...we always enjoyed seeing the two of you on your walks. Sending you and family prayers and hugs. Richard & Joann McMahon 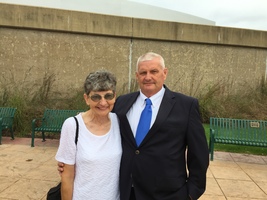