To share your memory on the wall of Thomas Sampson, sign in using one of the following options:

Thomas was born July 27, 1942 in Parkin, Arkansas, the son of Thomas Clark Sampson I and Rosialee (Bell) Sampson. The family moved to Clinton, Iowa where he attended Clinton Community Schools, graduating from Clinton High School. While in school, he developed a love for swimming and became an avid swimmer.
Thomas Clark served in the United States Army, seeing combat during the Viet Nam War. He was released from military service on a hardship discharge after the death of his father. He returned home securing employment at DuPont Company and remained in their employment until he retired.

Thomas enjoyed socializing with family and friends. He also loved to hunt and fish. Thomas was a passionate and skilled golfer, a longtime member of the Valley Oaks Country Club. He participated and won many golf tournaments. Thomas also loved playing league softball.

He was preceded in death by his parents – Thomas and Rosialee, one brother – Henry Lee and one sister – Pearlie Mae Clanton.

To send flowers to the family or plant a tree in memory of Thomas Clark "TC" Sampson, please visit our Heartfelt Sympathies Store.

Receive notifications about information and event scheduling for Thomas

We encourage you to share your most beloved memories of Thomas here, so that the family and other loved ones can always see it. You can upload cherished photographs, or share your favorite stories, and can even comment on those shared by others.

Posted Jul 23, 2020 at 10:13pm
Are thought go out to the Sampson Family. TC was always fun to be around. He will be missed
Finis and Vicky Drake
Comment Share
Share via:
HS

Flowers were purchased for the family of Thomas Sampson. Send Flowers

Posted Jul 20, 2020 at 08:48am
Shellley, Sending our Love and Condolences, your C-19 Team Family, The Mostellas and Hartsells 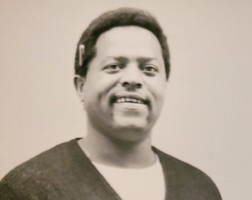