To share your memory on the wall of Stephen Hege, sign in using one of the following options:

Steve graduated from Clinton High School in 1968 and then attended one year of Clinton Community College. During his time in high school, Steve participated in the Clinton High Acappella Choir and was active with the organization Up With People. During this time, Steve and his cousin Jeff Luckritz formed a comedy team and performed for various groups in the area, especially youth groups in several different churches.

Throughout his adult life, Steve worked at various jobs in the Clinton community, including Roehl Phillips Furniture Store, Pinney Printing in Clinton and Bawden Printing in Eldridge, IA. During his time at Bawden Printing, Steve developed serious heart issues that caused him to have to go on disability.

Steve enjoyed the Mississippi River and spent hours by the river enjoying the river traffic as well as the eagles, pelicans and seagulls. Steve was a loyal fan of the Clinton Lumberkings and could be found at many of their home games. Before developing heart problems, Steve enjoyed playing golf.

Steve was preceded in death by his father, Marion Hege; brother, Dennis Hege; and grandparents Isaac and Dolores (Hege) Mulder; and John and Emma Neumann.

To send flowers to the family or plant a tree in memory of Stephen John Hege, please visit our Heartfelt Sympathies Store.

We encourage you to share your most beloved memories of Stephen here, so that the family and other loved ones can always see it. You can upload cherished photographs, or share your favorite stories, and can even comment on those shared by others.

Posted Dec 01, 2019 at 02:47pm
My thoughts and prayers are with the Hege family. My memories of Steve are from his support of his brother Denny. Steve was always in the front row at baseball games offering up an ice cream cone for a base hit. Now Steve and Denny can enjoy that ice cream together!!
Gary Montgomery
Comment Share
Share via:
RP

Posted Nov 27, 2019 at 03:56pm
There are no words to express how I feel. Steve had a real gift for friendship. He & I were inseparable as kids -- he was the kind of best friend every kid should be lucky enough to have. He was a natural-born leader and the kid we all tried to emulate. His mother, father, grandmother -- what wonderful people! I deeply regret that after high school our paths no longer crossed, but I will always treasure the many memories of the fun times we had together as kids, along with Denny. They were the best neighbors and friends ever. My love and condolences go out to Doris and Sharon and the rest of your family. Peace. Robert Pillers
Comment Share
Share via:
DK

Posted Nov 22, 2019 at 08:12pm
My best friend Steve...The things we did and the memories we shared are too many to go through. Met Steve 45 yrs ago. We clicked so much it was incredible! We laughed so many times. He had this certain personality that was rare. Worked side by side for many years in the printing field. From going to the Ike's fish fry, Boating , fishing, camping, hiking or just plain hanging out.....I am a better person for have knowing him.....He was my go to for advice....Nobody could tell a joke quite like Steve....nobody!! I will think of him every day for the rest of my life....and then hook up with him again! Love you Steve and miss you....your close friend Dennis Kinkaid
Comment Share
Share via:
DB

My sincere condolences to Doris and Sharon and the entire Hege family. Although it's been many years since our paths have crossed, I have so many great memories of growing up in the same neighborhood with the Steve and Denny and the Hege family. From neighborhood wiffle ball games on the grass in front of Yourd Gymnasium to summer evening trips to Don's Drive-In for root beer and numerous rounds of golf, Steve was always kind and fun to be around. Rest in peace, my friend. Sincerely, David Brown, Urbandale, IA 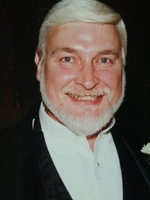