To share your memory on the wall of Ronald Heppner, sign in using one of the following options:

Provide comfort for the family of Ronald Heppner with a meaningful gesture of sympathy.

Ron was born January 30, 1960 in Clinton, Iowa the son of Douglas and LaRonna (Christofferson) Heppner. He was a 1978 graduate of Clinton High School. Ron was united in marriage to Jaxi Bastin on March 12, 1999 in Little Rock, Arkansas.

Since 1995, he worked for the Union Pacific Railroad.

Ron enjoyed boating and was an avid Chicago Cubs and Bears fan. He was a very good-hearted person, always willing to help someone out and also had a huge heart for animals. Above all, he loved his family very much and will be greatly missed.

Memorials made can be directed to Lemke Funeral Homes for funeral expenses.
Read Less

We encourage you to share your most beloved memories of Ronald here, so that the family and other loved ones can always see it. You can upload cherished photographs, or share your favorite stories, and can even comment on those shared by others.

Posted Nov 14, 2019 at 08:09am
I am sorry for you loss. He is with Jesus now and if he was in any pain it is gone now. One day you will see him. Isaiah 57:1-2Good people pass away; the godly often die before their time. But no one seems to care or wonder why. No one seems to understand that God is protecting them from the evil to come. For those who follow godly paths will rest in peace when they die.
Blessings
Marilee Mueller Vorbeck was my maiden name

Posted Nov 12, 2019 at 06:45pm
Ron was a good friend...almost 25 years. He taught me to love college football. We watched a lot of games together. (GO BIG RED!) He could tell some jokes for sure. I'll miss him.
Comment Share
Share via: 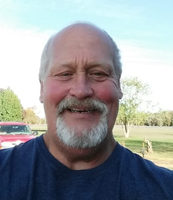