To share your memory on the wall of Robert Benson, sign in using one of the following options:

Bob was an operator and also set-up rolling mills and slitters – working for Jim Walter for 17 years and later Air Vent for 19 years.

Bob loved being outdoors, especially camping – spending time with his family. He enjoyed working on small engines. He also enjoyed talking about farming with his family. He liked to watch football, cheering on his favorite team – the Oakland Raiders and he enjoyed watching baseball and basketball. He was a very social person, enjoyed chatting with friends, making new friends and was always available to help someone in need.

He was preceded in death by his parents, first wife – Lois and second wife – Rosemary.

Receive notifications about information and event scheduling for Robert

There are no events scheduled. You can still show your support by sending flowers directly to the family, or planting a memorial tree in memory of Robert Maurice "Bob" Benson.
Plant a Tree

We encourage you to share your most beloved memories of Robert here, so that the family and other loved ones can always see it. You can upload cherished photographs, or share your favorite stories, and can even comment on those shared by others.

Posted Aug 18, 2020 at 08:44am
Grandoa and I took a road trip to Arizona with his trailer hooked to the back of the truck. Seeing the different sites and the time spent talking was a big treasure I will forever have in my heart.
Comment Share
Share via:
RM

Posted Aug 18, 2020 at 07:17am
I first met Bob in January 1975, I was working for a plant in St. Louis Missouri that was closed and merged with Warren Screen in Camanche Iowa where Bob was working as a set up man on roll forming machines. He and his then wife Lois was the first to show me an example of Iowa kindness by inviting me to their house for supper and an evening of drinking coffee, his favorite drink, And talking "work" the whole evening.
Bob was a "company man" all the way and lived and breathed the art of roll forming. R.I.P. old friend.
Comment Share
Share via:
L

He loved yo talk over coffee. Thank you for sharing a memory
L

He loved yo talk over coffee. Thank you for sharing a memory 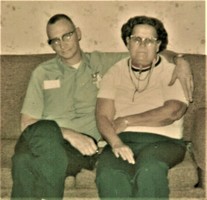