To share your memory on the wall of Richard Petersen, sign in using one of the following options:

Richard was born in Bryant, Iowa, on November 2, 1934, the son of Morris and Alma (Voss) Petersen. He graduated from Charlotte High School in 1952. After graduation, he enlisted in the U.S. Army and was active during the Korean War and served as an M.P. in Alaska. He retired from Lord Baltimore Press/International Paper in Clinton after 36 years.

Richard was an avid reader, enjoyed hiking and fishing, and was a sports enthusiast. He especially loved baseball, was a devoted Yankees fan, and regularly attended Clinton Lumber Kings games.

Condolences for Richard’s family may be left on the obituary page at www.lemkefuneralhomes.com.

Memorials may be directed through Lemke Funeral Home.
Read Less

There are no events scheduled. You can still show your support by sending flowers directly to the family, or planting a memorial tree in memory of Richard Morris Petersen.
Plant a Tree

Plant a Tree in Memory of Richard
Plant a tree 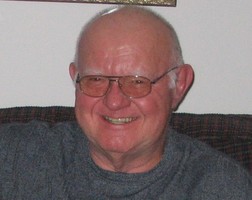