To share your memory on the wall of Richard Kelley, sign in using one of the following options:

Richard was born on April 22, 1933 in Fairfield, Iowa, the son of Harley and Margaret (Dwyer) Kelley. He attended Fairfield Schools and was a 1951 graduate of Fairfield High School. Upon graduation he was employed by Western Electric (A.T.&T.) for 37 years. After he retired for two years, he went back to work at Clinton Community College in the maintenance department at the GATSI Center for 10 years.

He served four years in the Iowa National Guard and then the U.S. Army Signal Corps during the Korean conflict. He was united in marriage to Jean Ann Rowan in Asbury, Iowa. Together, they raised four children; Ted, Kevin, Mike, and Erin.

Richard is survived by his wife, Jean, two sons – Ted (Martha) Kelley of Gilbert, Arizona and Kevin Kelley of Clinton, Iowa one daughter – Erin (Spencer) Bezozo, of Chandler, Arizona, Grandchildren – Gillian, Brianna, and Ryan all of Arizona, and Lukas of Davenport, Iowa, Sisters-in-law – Jeri Malli of Clinton and Jill Housenga of Camanche, Iowa.

A memorial will be established.


☘
THOSE WE LOVE DON’T GO AWAY,
THEY WALK BESIDE US EVERY DAY,
UNSEEN, UNHEARD, BUT ALWAYS NEAR,
STILL LOVED, STILL MISSED, AND VERY DEAR.
– AN IRISH BLESSING.
☘
Read Less

There are no events scheduled. You can still show your support by sending flowers directly to the family, or planting a memorial tree in memory of Richard Raymond Kelley.
Plant a Tree

Posted Mar 20, 2021 at 05:16pm
So sorry to hear of R.R.'s passing. He was a wonderful storyteller and we always enjoyed visiting with him when we would see him. It does seem appropriate that he passed on St. Patrick's Day. Our thoughts and prayers for all of R.R.'s family and friends.
Comment Share
Share via:
PF

Posted Mar 20, 2021 at 08:58am
I worked at Western with R.R. back in the late 60's and always thought he was one of the nicest person you could meet. Always wanted to get in touch with him but never got the chance. Sorry for your loss but I am sure he is in a happy place still wearing the green.
Comment Share
Share via:
SJ

I had the pleasure of working with Richard at the Graphic Arts Center and looked forward to seeing how he was dressed on St. Patrick’s Day. It somehow seems fitting that was the day he passed. My thoughts and prayers are with his family. He was a great guy! 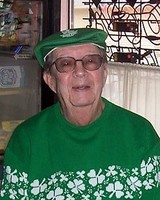