To share your memory on the wall of Phyllis Von Thun, sign in using one of the following options:

Provide comfort for the family of Phyllis Von Thun with a meaningful gesture of sympathy.

Phyllis was born January 7, 1940 in Clinton, Iowa the daughter of Phillip and Barbara (Blanchard) DeWitt. She was united in marriage Roland “Rollie” Von Thun on November 11, 1956 in Charlotte, Iowa.
Phyllis was a cook and chef for many area establishments, concluding her career at Phil’s Country Bar in Camanche.

Phyllis was a member of the Iowa Hawkeye Horseshoe Pitchers Association, and later would later be inducted into the Hall of Fame.

Phyllis loved being outdoors, whether it was camping (especially chatting around the campfire), fishing or simply tending to her garden. She was an avid fan of Wheel Fortune. Above all, she always put her family first and loved then dearly - she will be greatly missed.

She was preceded in death by her parents, one brother and one sister.

In lieu of flowers, memorials made can be directed to the family.
Read Less

We encourage you to share your most beloved memories of Phyllis here, so that the family and other loved ones can always see it. You can upload cherished photographs, or share your favorite stories, and can even comment on those shared by others.

Posted Feb 02, 2020 at 02:41pm
So sorry to just see this. Loved the lady. She was my favorite cook! She made the best chips and fries and always let you snitch some! Worked with her for many years and never was a dull moment! Will miss her.
Love, Cheryl Schroeder
Comment Share
Share via:
KM

Posted Jan 29, 2020 at 09:20pm
Rollie, Dale, Dawn, Roland, Rhonda & Royanne, so sorry to hear of the passing of Phyllis. I have wonderful memories of her and all of you from back in the 70's when we were neighbors on Springdale Drive. May you find peace and comfort in this difficult time.

Posted Jan 26, 2020 at 05:59pm
My heartfelt condolences go out to each member of Phyllis's beloved family. I am saddened by her passing but it is a great consolation that she is in the warm embrace of her Savior, Jesus Christ. I have many wonderful memories of gatherings with the Von Thun family, and in each I can "see" Phyllis's smile and "hear" her laughter. God bless you all as you gather to honor a treasured life.

Life is changed.... not taken away. 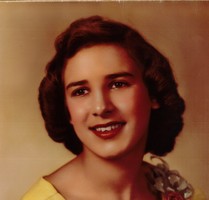