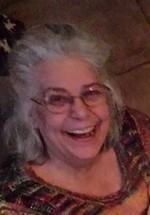 Margaret Ann “Peggy” Shadle, 66, of Fulton, Illinois passed away at the at the University of Iowa Hospitals and Clinics on Friday, January 17, 2020. Honoring her wishes, cremation rites have been accorded with a celebration of her life taking place from 1 pm to 5 pm on Sunday, January 26, at King Pins in Fulton, Illinois. Lemke Funeral Homes assisted the family with arrangements.

Peggy was born June 30, 1953, in Clinton, Iowa the daughter of Henry and Mary Margret (Graham) Ashpole. She was united in marriage to David Shadle in July 2006.

Peggy had a unique upbringing; she and her family were raised around the family owned carnival for 20 years. During that time, she had a fondness for Elephants and took that love of them towards collecting anything Elephant.

Peggy enjoyed camping, watching Wheel of Fortune, socializing with friends and family and spending time with her grandchildren. Peggy also loved her fur babies – her dogs Bean & Lucky. Above all, she loved her children and grandchildren very much and will be sadly missed.

Peggy is survived by her husband David of Fulton, Il; her daughter – Mary (Darin) DeHaan of Oregon, Il and Chad (Jennifer) Hayden of Sterling, IL; Devin, Ryanne and Breanna DeHaan all of Oregon, Ill; three sisters – Donna Shepherd and Laura (Ron) Younts - both of Clinton and Diana (Donnie) Banks of Michigan; with many nieces, nephews, cousins and friends.

She was preceded in death by her parents – Henry and Mary Ashpole and niece Sally.
Memorials made can be directed to the family.