To share your memory on the wall of June Soenksen, sign in using one of the following options:

June worked for the AC Nielsen for 26 years starting as a coupon processor and ended her career as a customer service representative. She enjoyed bowling, golf, her dogs, crafts, ceramics and most of all her children and grandchildren.

June was a member of Jesus Christ, Prince of Peace Catholic Church.

She is survived by Steve and Susan Soenksen of Rockford. Grandchildren Timothy and Julie Soenksen. Her sister in law Bette Dean and brother in laws Roger and John.

She was preceded in death by her husband, and son, Michael, her parents and twin sister Judy (Victor) Bjork of Toledo, Iowa.
Read Less

To send flowers to the family or plant a tree in memory of June F. Soenksen (Smith), please visit our Heartfelt Sympathies Store.

Receive notifications about information and event scheduling for June

We encourage you to share your most beloved memories of June here, so that the family and other loved ones can always see it. You can upload cherished photographs, or share your favorite stories, and can even comment on those shared by others.

Vic and Kendra Bjork and Jean McPeak sent flowers to the family of June F. Soenksen (Smith).
Show you care by sending flowers 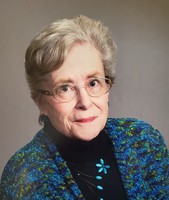