To share your memory on the wall of John Caruso, sign in using one of the following options:

Provide comfort for the family of John Caruso with a meaningful gesture of sympathy.

John began his career with the Rock Island Railroad and concluded his career at the Southern Pacific Railroad.

John was a member of Prince of Peace Parish; he was a devout Catholic whose life’s focus was his faith in our Lord.

John enjoyed the outdoors, especially gardening. He also enjoyed working with his hands, whether it was woodworking or working on cars. Above all, he loved his family very much and will be sadly missed.

Preceding John in death were his parents, his wife, daughter, Mary Jane and son, John.

Memorials made can be directed to the wishes of the family.
Read Less

We encourage you to share your most beloved memories of John here, so that the family and other loved ones can always see it. You can upload cherished photographs, or share your favorite stories, and can even comment on those shared by others.

Kris and Jason Jones and Family, Steve and Cindy Wilson, and others have sent flowers to the family of John S. Caruso.
Show you care by sending flowers

Kris and Jason Jones and Family

Posted Jan 05, 2019 at 10:12pm
Please accept our most heartfelt sympathies for your loss, our thoughts are with you and your family during this difficult time.

Kris and Jason Jones and Family purchased flowers for the family of John Caruso. Send Flowers

Posted Jan 05, 2019 at 03:27pm
Please accept our most heartfelt sympathies for your loss... Our thoughts are with you and your family during this difficult time.

Posted Jan 05, 2019 at 09:41am
May God give you His peace during this difficult time. Our thoughts and prayers are with you. 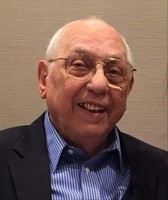