To share your memory on the wall of James Leu, sign in using one of the following options:

Jim was born October 25, 1946 in Clinton, Iowa the son of Orval and Pauline (Renkes) Leu. Jim served his country in the U.S. Armey, a veteran of the Vietnam War. While in the Army he served with the 1st battalion 27th infantry Wolfhounds.

Jim was united in marriage to Pamela “Pam” Leonard on September 13, 1969 in Clinton; they were together for 50 years just prior to her passing 41 days ago.

Jim worked as an Operator at Lyondell for 35+ years. While there he also worked as a department supervisor.

Jim loved being outdoors, he enjoyed boating and fishing. Above all, he loved his family very much especially his grandchildren and will be sadly missed.

There are no events scheduled. You can still show your support by sending flowers directly to the family, or planting a memorial tree in memory of James Michael "Jim" Leu.
Plant a Tree

Plant a Tree in Memory of James
Plant a tree 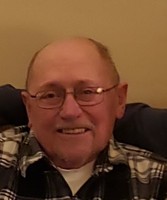