To share your memory on the wall of Donald Zimmerman, Sr., sign in using one of the following options:

Provide comfort for the family of Donald Zimmerman, Sr. with a meaningful gesture of sympathy.

Don was born January 12, 1940 in East St. Louis, Illinois the son of Raymond and Gladys (Hay’s) Zimmerman. Don was united in marriage to Dixie Tieso on December 2, 1962 in Clinton, Iowa.

Don enjoyed the outdoors, especially fishing. He loved to talk like Donald Duck, his favorite cartoon character, and collected McDonald’s toys since 1972. Don volunteered, dressing up as Santa Claus or a Clown, for various events – he loved to make people smile. Don and his wife operated the Clinton Rescue Mission for the homeless; he had a golden heart, always willing to help the less fortunate. Above all, he loved his family very much especially his grandchildren and great grandchildren.

Don is survived by his daughters – Tina (Delbert) Stratton of Pisgah, IA and Vickie Zimmerman of Clinton; sons – Don (Ellen) Zimmerman and Richard (Crystal) Zimmerman both of Clinton; 14 grandchildren, 16 great-grandchildren; sisters – Ellen (John) Miller of New Orleans, LA and Marge Knight of ID; with many nieces, nephews, cousins and friends.

Preceding Don in death were his parents, his wife Dixie, 2 sisters and 5 brothers.

Memorials made can be directed to the wishes of the family.
Read Less

We encourage you to share your most beloved memories of Donald here, so that the family and other loved ones can always see it. You can upload cherished photographs, or share your favorite stories, and can even comment on those shared by others. 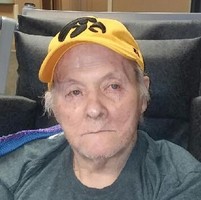