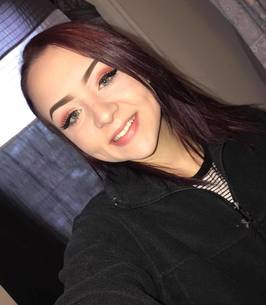 Reed Daniele “Dani Speakman” 21 years of age, of Clinton, passed away unexpectedly in her home, Tuesday, June 7, 2022. Cremation rites have been accorded with a celebration of her life taking place from 2pm to 5pm on Saturday, June 18, at Lemke Funeral Home’s South Chapel, on 2610 Manufacturing Drive. Following these services, there will be a gathering at the Cavinder residence, so there the celebration may live on.

The youngest daughter of Dona Speakman, and the daughter of Monroe Taylor, Dani was born June 10, 2000, in Clinton. During her school years, she was an exceptional scholar and acapella choir singer, as well as a member of Women’s Triple Trio. She would graduate in 2018, where then, after her graduation, she would continue her previous 2 years of employment at Hyvee - earning a manager position. Later in her life she would be an employee of Home Depot - working outside in the floral department, as admiring nature was in her nature.

Dani’s big heart had its favorites. Her nieces - which were her world, her cats, which she regarded as her children, and fishing. Dani on the rocks with a bobber in the river would be an easy picture to paint - as there would be plenty of references. She simply loved fishing, and would do so as often as possible - when the seasons would allow it.

But besides these, Dani had an immense love for all animals, big or small - from insects to mammals. While she loved all animals dearly, she had a special admiration and curiosity for sharks, adorning herself with “Jaws” in a tattoo. She aspired to be a marine biologist - and a marine as well. She would do anything to be closer to wildlife. Above all, she loved her friends and family.

Dani’s heart simply held so much love for a plethora of people, activities, and animals. She is also held in the hearts of many; and she will live on, as to live in hearts we leave behind is not to die.

Dani is survived by her loving grandparents, James and Jada (Hart) Cavinder; who raised her through her first 18 years of life, as well as Dona Speakman, her mother, and her father - Monroe Taylor, of Lawton, Oklahoma. One sister- her elder- Alexis Speakman and her younger brother, Timothy “T.J.” O’Malley, of Clinton, as well as her two nieces, Arorah and Amorah, and one aunt, Lona Speakman-Peña of Clinton, with several great aunts, uncles, and cousins.

She is preceded in death by an older sister, Paige; and a cousin, Ashleigh Decker. She did not walk alone.

Memorials made can be directed to family.

Special thank you to Lemke Funeral Homes, who assisted the family with arrangements.