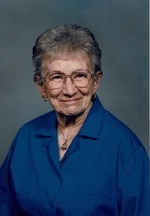 Dana L Fox was born June 14 1921, the youngest of four children of the family of J W (Billy) Fox and Cora Sidoreus Fox. She was born on a farm south of the town of Jamaica where Dana's family lived until 1946 when they moved to the town of Jamaica. Thus began a stretch of 97 years of Dana's life in and near the little town of Jamaica and 71 years in the same house at 500 Adams Street.

Dana attended school at Jamaica, graduating in 1940. Having been a child of the Great Depression, she would now endure the tribulations of being a young adult at the onset of World War II. During the war Dana stayed and worked the farm with her father after her brothers were sent overseas. Later in life she would quip “I never got off the back porch” as she never lived more than three miles from where she was born.

Dana became interested in Family Genealogy in 1968 which soon evolved to a quest. At a time when most genealogy research was accomplished the hard way, by writing letters to county offices and genealogy societies for records and information and by traveling from cemetery to cemetery. She managed to compile an extensive volume of material to support the history of her family and for the benefit of her descendants.

The following is transcribed from Dana's genealogy collections and are her own words.

"And then there is me. I have always lived in or near Jamaica, was raised on a farm, youngest of four children. I graduated from the Jamaica High School - not at the top of my class! I worked in the fields since I was ten, started driving the tractors then. Worked at various jobs after moving to town and ended up in library work just by accident. I am now certified and have managed the Jamaica Library since 1953. After the divorce I also worked in the Bagley Library. I hope to retire from Bagley some day soon, but will work in Jamaica until the cows come home, I guess! Old Librarians never quit - they just check out!

I have more hobbies than I can keep up with but enjoy them all - music, stained glass, quilting, knitting, reading, gardening, flowers, genealogy.

I live in a 3 bedroom house, just me and my cat, but like company and have weekend guests nearly every weekend.

I'm 5'-1" tall, weigh 130 lbs - I'm not overweight, just too short. I was a green eyed white haired kid and I am slowly working back to the white hair." Dana


Dana passed away in her sleep on Friday February 1 2019.

Dana is preceded in death by her parents, Billy and Cora, brothers Lebren and Dennis and a sister Leora. Surviving her are two children, Phil of Bagley and Michele of Long Grove, three grandchildren, Tony, Cindy of Perry, Paul of Lake Panorama and step-grandchild Tina, of Morenci AZ.

The family will conduct a private ceremony in her memory at a future date.