To share your memory on the wall of Bryon Sheker, sign in using one of the following options:

Bryon was born September 3, 1953 in Jefferson, Iowa the son of Gilbert and Ernila (Gauger) Sheker. Following his graduation from Clinton High School, he joined the United States Air Force.

Bryon was united in marriage to Karla Cox on April 15, 2016 in Clinton, Iowa.

He worked at the Clinton Nestle’ Purina Plant, as a line operator, retiring after 25 years of service.

Bryon enjoyed the outdoors, especially hunting and fishing. He also enjoyed drag racing, making many trips to the Cordova race track. He also enjoyed socializing with family, friends and co-workers at Purina. He loved the fur-babies, his dogs, that he had all of his life. Above all, he loved his family very much and will be greatly missed.

Preceding Bryon in death were his parents and one sister.

In lieu of flowers, memorials made can be directed to the family.
Read Less

To send flowers to the family or plant a tree in memory of Bryon Wilson Sheker, please visit our Heartfelt Sympathies Store.

We encourage you to share your most beloved memories of Bryon here, so that the family and other loved ones can always see it. You can upload cherished photographs, or share your favorite stories, and can even comment on those shared by others.

Posted Feb 11, 2019 at 07:15pm
Due to weather, we will not be able to travel from DeKalb to attend the service for Bryon as we planned. I really wanted a chance to properly say "Good Bye" to a person who meant a lot to me. I enjoyed his friendship during my years in Clinton and sad that I will never hear that wonderful laugh again. He was a good friend and we had some wonderful times - hanging out at the riverfront, working on cars, and partying! We had some great times, along with Jon and Dan. The "Sheik" will be missed greatly. Our prayers are with the family. Tim Nier, DeKalb, IL
Comment Share
Share via:
M 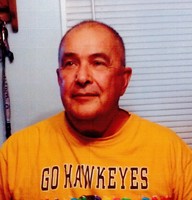